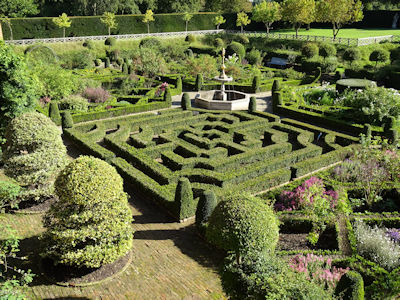 We don’t know how many more perfectly autumnal days we’re going to have this year, so we took advantage of the weather and our willing house guest to make the trek to Hatfield House and the adjacent palace and gardens. We especially wanted to photograph the gardens and the maze now that the foliage has reached its peak, before the leaves fall and winter sets in… and oh, what a lovely day it was! The gardens were amazing, and we especially enjoyed Renaissance, the magnificent water fountain in front of the main house. It was still under construction when we were there in April, so we were taken quite by surprise as it the entire structure shifted, flowed, emerged and submerged before our eyes. It is a surprisingly successful positioning of new and modern amongst the old and traditional.

The old Hatfield Palace, as I explained in my April post, was where Queen Elizabeth I spent most of her childhood, and where she was living when she learned of her succession to the throne when Henry VIII died in 1558. The grounds are huge and lovingly maintained, with a large number of historic garden features and plants. As one who is more fascinated by daily life than great events, I was once again intrigued by the personality that pervades the estate – we met up with and exchanged pleasantries with the current owners as our paths crossed out in the garden — Hatfield House is their home, not just a monument to people long gone. 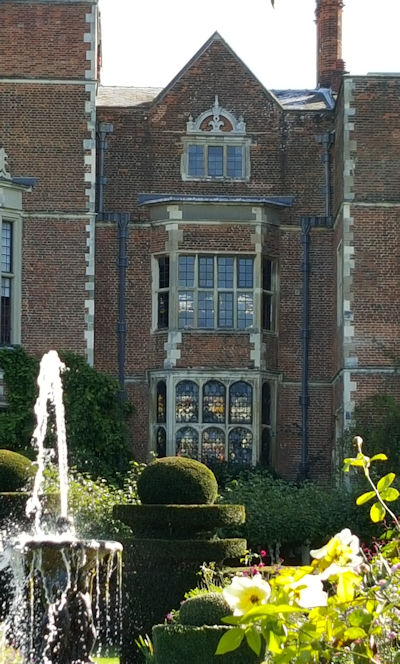 I found that the personal touch extends to the shops and small businesses that make the estate feel like a small village. One shop, for instance, was selling small jars of medlar marmalade, and we spoke with the woman responsible for collecting the medlars each autumn. She told us about needing to wear a hard hat to keep from being conked on the head by falling fruit as she reached up into the trees, and we visited with the beekeeper who explained that the honey we had just purchased would taste of the lime trees we had been admiring in the park. The marmalade and honey will taste all the sweeter for having met the people who love the garden enough to keep its history alive by making use of its bounty!

(If you are reading this post in an email, you will need to click through to the website in order to see the gallery of photos below. Enjoy!)