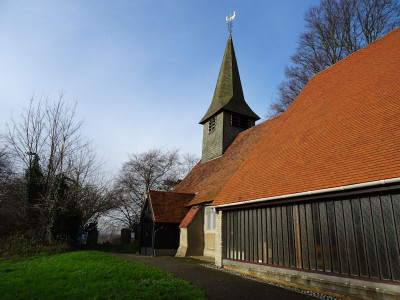 St. Peter’s Church in Thundersley always looks disappointingly modern to me, but it is actually quite old and definitely stands on ground that has been holy since ancient times. The original church, dedicated to St. Michael, was built in 1120, but burned down less than a century later, in 1209. A new church erected on the site was completed in 1230, and was dedicated to St. Peter. The current weather vane bears the figures of both saints.

The tower was added later, in 1588, to contain the bell that was given to St. Peter’s to commemorate the English victory over the Spanish Armada. And inside the chancel hangs a helmet that supposedly belonged to King Henry VII who was the Lord of the Manor of Thundersley. The church is, indeed, both old and historic! 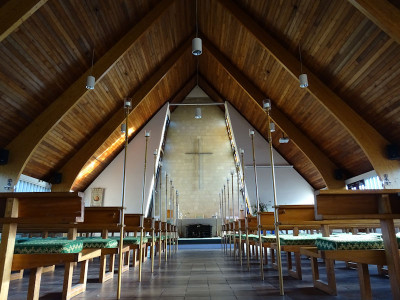 The modern (20th century) addition came about when the original 13th century building became too small for the increasing population as Thundersley village expanded.

This week, our local church became personal. While cleaning out Jeff’s mum’s house last month, we found an old plaque that had been presented to the Saward family in remembrance of their soldier son who was killed in Flanders in January 1918. That was news to all of us, having never even heard the name of Bert Louis Saward mentioned. Apparently Jeff’s grandfather Ernest (who used to live across the road from where we now live) had an older brother, whose story we are now beginning to piece together. 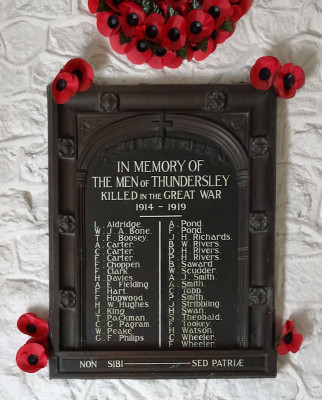 Jeff and I walked up to St Peter’s this week to locate the WWI memorial plaque that lists Jeff’s ancestor, public proof of his existence and a private connection to a time and place we hadn’t really considered before. We stood in silence, thinking of a young man with our surname, who died in Flanders in the hell of war, oh so many years ago.

We are holding the thread of his life in our psyches now; our interest has been piqued and our imaginations stirred. I think genealogy does that. As one clue leads to another, a picture emerges and a story unfolds. We will be going to France in search of Bert’s grave at some point, but for now that little corner of a very old village church holds an important piece of a personal history.

4 thoughts on “The Church on the Hill”