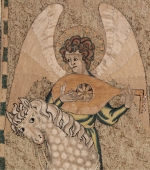 We were lured into London yesterday by a wonderful exhibit at the Victoria & Albert Museum, Opus Anglicanum: Masterpieces of English Medieval Embroidery. We arrived when the doors opened yesterday, hoping to beat any crowds later in the day. Even though it is a ticketed event, we knew we’d want time to linger and press our noses up against the glass cases for a closer look. Interestingly, most of our fellow visitors were male – I’d expected to be crowded in with an audience of primarily female stitchers.

No photography is allowed, presumably to protect the fragile fabrics, but there is an enormous book available in the gift shop – we ordered one to be shipped directly to our doorstep so we wouldn’t have to lug it with us for the rest of the day. (The photos above are from advertisements on the museum website.)

The wonderfully curated collection features exquisitely stitched items from around Europe, some of which have not been seen in Britain since they were produced many centuries ago. Most of the stitchers were professional craftsmen, primarily men, though some women also worked on them. Many of the items were copes and other religious vestments that were commissioned by Europeans seeking the best embroidery available.

The detail was truly remarkable. Not only did we enjoy searching out familiar religious symbols and motifs, but we also marveled at the accuracy with which people and animals were depicted. Jeff could actually identify the species of the stitched birds,still completely recognizable today. And I was delighted to see that the depictions of my pilgrim saint, St. James, were complete with tiny cockleshells and pilgrim attire.

It would be impossible for me to choose a favourite. I loved the many and varied depictions of Mary, each a miniature masterpiece that introduced me to the artist’s vision of the Virgin. But the contents of the last case really took my breath away – a stitched coffin pall loaned by the Worshipful Company of Fishmongers. Adorned with sea creatures, including double-tailed mermaids, it is a stunning dimensional piece of embroidery, and truly representational of the thriving fish industry in London, then as now.

Then, too, there were the little Green Man faces on a cope that was later re-purposed and made into several smaller objects when religious copes fell out of favour during the Reformation, and actually became quite dangerous to own. Reunited but not resewn, and illustrated with modern digital imaging, the pieces now tell a bigger story of English history.

It truly pains me not to be able to show you photos from the exhibit, but perhaps my words will inspire you to visit them for yourself – and that is always the best way to experience such beauty and craftsmanship. If you’ll be in London before mid-February, don’t miss it! At the very least, go linger on the Opus Anglicanum webpage to admire some close-ups of featured items. If you’re interested in embroidery, you’ll love this video on The Making of Medieval Embroidery. 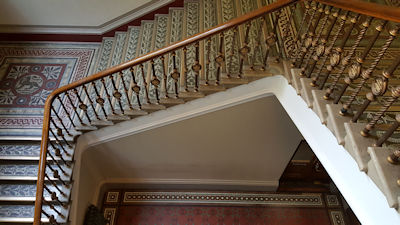 Afterwards, we wandered the V&A’s labyrinth of halls and stairways (which are beautiful in their own right) to navigate our way to a favourite piece of Gothic Revival furniture way up on the 4th level. 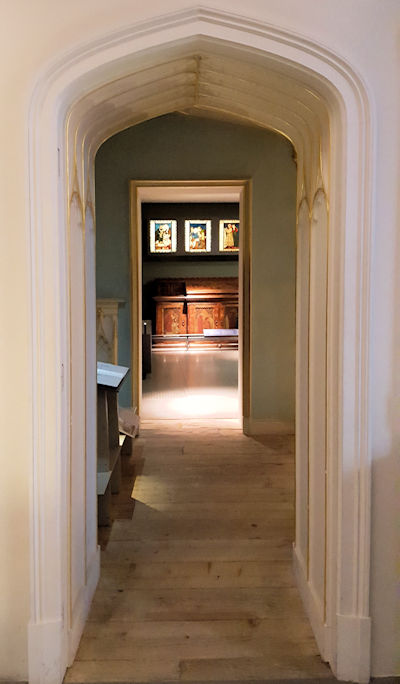 Fortunately, photography is allowed in that part of the museum, and there was a helpful guard available to shut off the alarm when the camera got too close. 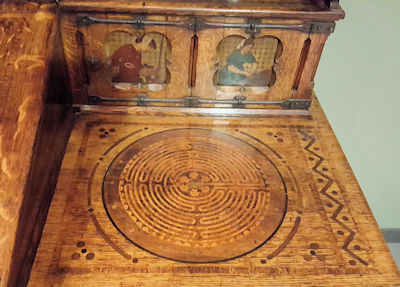 It just wouldn’t seem right to leave without seeing it one more time!