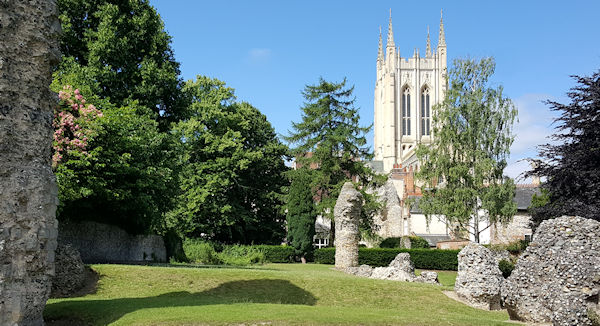 I love it when a pilgrimage finds me. Usually the pilgrim goes off in quest of the the pilgrimage, with the destination firmly in mind, but once in a while, just when I need it most, I stumble on to a place or shrine that seems to have called me in.

King Edmund was the king of East Anglia from 855 to 869 when he was martyred by invading Danes because he refused to renounce Christ. The Danes beat him and shot him with arrows, then beheaded him and threw his head into the forest. His head was later found when searchers heard a wolf calling out to them in Latin. A great Abbey bearing Edmund’s name was established, and his shrine attracted pilgrims from around the world for over 500 years. 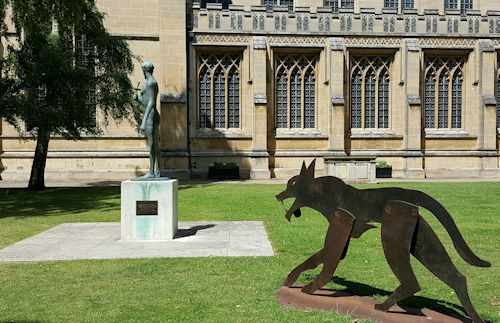 Bury St. Edmunds is a lovely city about an hour and a half north of us, Its welcome sign proclaims it as the jewel in the crown of Suffolk, and I’m inclined to agree. I had heard the name before, but knew nothing more about it. The old city centers around the grounds and gardens of the ruined Abbey of St Edmund, and would probably still be recognizable to the pilgrims of old.

After wandering through the gardens, we spent some time exploring the Cathedral, a beautiful building which began life as a parish church in the 12th century. A series of renovations has brought it to its present size and glory. Even now, there is still scaffolding down the nave as new work is being carried out. We tiptoed in just as Sunday Worship services were ending and the choirboys were processing out; I was touched by the friendly welcome given to two camera-toting tourists. I hadn’t realised how much my soul needed a pilgrimage experience, even just a brief encounter with the spirits of pilgrims past. Finding this unexpected pilgrimage gem so close to home felt like a gift. 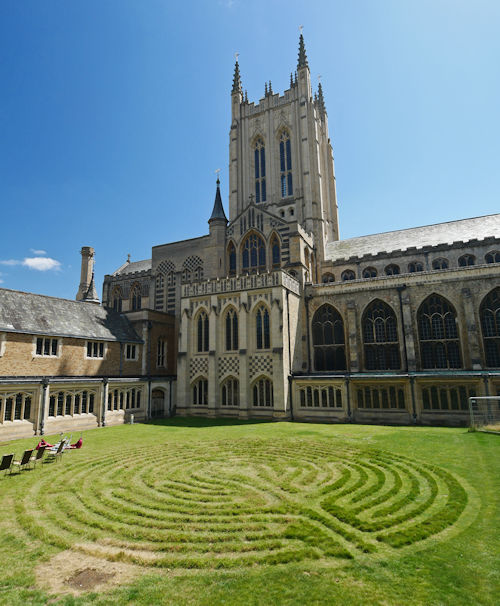 And yes, there was a labyrinth, too, with time for a walk…