Three weeks on and the Women’s March is still reverberating in my psyche. The world has changed, and so have I – my task has been to figure out what that means and how I want to move forward in this crazy world. As is my custom, I’ve used my knitting needles to quiet me enough to be able to hear and make sense of my own thoughts

The protest was a game changer for me, though I don’t think that protesting publicly is necessarily my calling in life. Will I do it again? Absolutely, but with care and discernment. Being in a crowd of that size was exciting and powerful, but it exacted a deep energetic toll from me. I have been grateful for the opportunity to take some time and space to unpack the experience slowly and carefully. 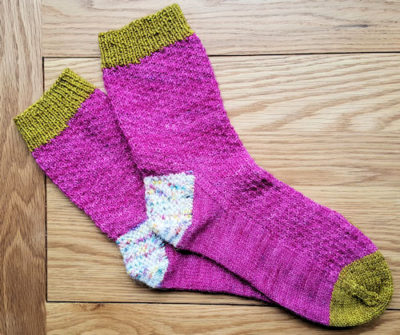 Inviting my needles to punctuate my inner dialogue, I designed and made a pair of socks, knitting them to tell the story of my initiation into activism. I ordered wool to match my pink pussy hat, then added green cuffs and toes to symbolize the rooting and growth of activism. The speckled heels coordinate with a friend’s socks, and remind me of the need to collaborate and build community. The pattern I used is named after Hermione of Harry Potter fame – a modern day hero(ine) who both acknowledges and embodies her magical soul. I can now clothe myself with courage when I need to step out of my comfort zone. 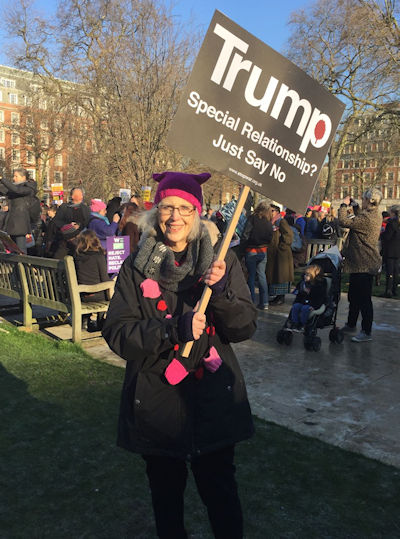 With those socks finished, I turned back to the mini hats I made and wore around my neck when I marched in London on January 21st. Seven hats symbolized seven women who could not join in the march in person. Their presence on my garland supported and encouraged me, and allowed me to include them in the global community of protesters. Let me tell you how that idea was born…

Looking at the Women’s March in London Facebook page the week before the march, I happened to see a sweet post by a woman who wished the marchers well, but who couldn’t attend in person. Spontaneously, I offered to take her name with me, an offer she gladly accepted. At the same time, a few other women asked me to walk in their names as well. So, I did what I do… I got out my knitting needles, enlisted a knitterly friend, and we made a miniature pussy hat for each woman. We then crocheted them all together, interspersed with hearts from my 60th birthday art project, thus anchoring those women into the fabric of my life. For that day, we walked together in spirit, with our arms around each other as we joined with the MILLIONS of others marching in cities around the world. We walked as one! 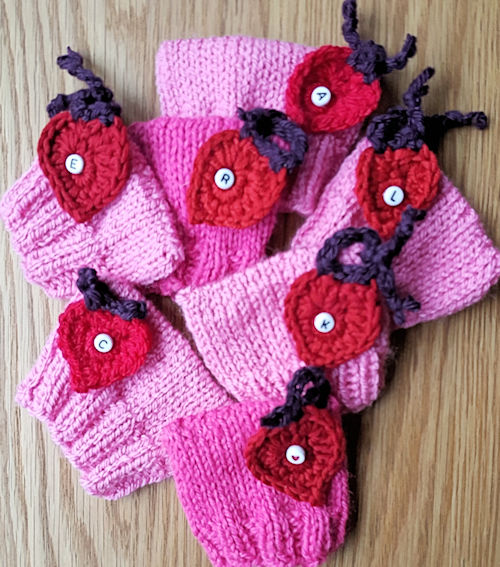 Today I cut up that garland so that I can mail each hat to the woman it represents.  And my new facebook friend? Antonia and I have stayed in touch. An experienced and heart-full protester, she’s given me incredible advice and support before and after the march, and shared some of her poetry with me, along with permission to share it here:

A big shout out to all those who rose today
Marching for democracy, for political honesty,
They who, in solidarity, get in fascists’ way
By demanding greater fairness and equality,
Taking to streets and tweets to have their say,
No one should suffer violence, exile, shame
For their gender, faith, love, ability, culture,
Place of beginning, that’s all a blaming game,
While my body stops me from being with you there
Another still conveys me, she holds my name
Written in her pocket, merged with the hope in me,
As you raise your chants and feet again, again, again,
We walk beside you, though our footfalls you won’t see,
Side by side together, folk and cities we can’t name
Linked this day and after, to help deal with what may be
Thousands next to thousands, so many now awake,
No time to be demure now, time to write our herstory
For dignity, survival and for our shared future’s sake. 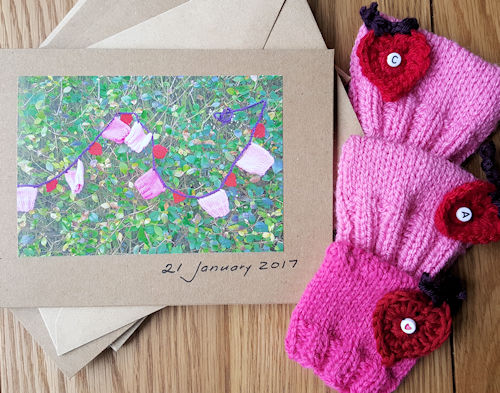