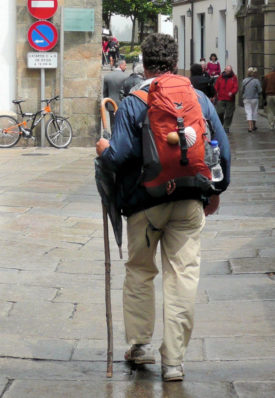 Long-time readers will be aware of my penchant for pilgrimage. I don’t know why or when it started, but I know the exact moment that it shifted from Nice Idea to Let’s Go. Jeff and I were in Santiago de Compastela with Labyrinth Lady, Lisa Moriarty, travelling as researchers in search of Spanish labyrinths some ten years ago. Walking towards the Cathedral, we saw this pilgrim walking ahead of us – and I was smitten. Seriously, that’s the only word for what I felt as I took off after him, wanting to watch him arrive at his destination, wishing I had the courage to ask his story. I still don’t know his story, but his arrival changed me forever. I wanted to be a pilgrim.

Four months later, Lisa and I hoisted our packs, headed for Paris, and embarked on our first walking pilgrimage from Paris to Chartres.

I don’t have the physique of an adventurer. I get blisters. My very curvy body looks ridiculous in sports clothes. I am sensitive to sun and heat. As an armchair traveller, I am a natural, but taking to the real road is very challenging. But I know enough not to ignore a call to adventure. In 2009 my draw was to France, and my intention was to walk in gratitude for some life-changing blessings and changes that had coloured my year. Walking into Chartres three days later was an unforgettable achievement.

I was a pilgrim. I wore my scallop proudly… but I didn’t feel done. Spain still whispers my name. Spain, however, feels more daunting than France – I speak even less Spanish than I do French, and I fear the heat and the greater distance. But my heart calls me to make the attempt, to claim victory over my fears and to make my way to Santiago. On foot.

Lisa and I are pilgrim companions. Compadres. We have explored the concept and pathways of pilgrimage continually for the past 10 years, often together. And we are ready to set out again.

We will soon be flying to northwest Spain to walk the Camino Inglés, the traditional route of medieval pilgrims from Britain and Scandinavia. There are many routes to Santiago, and the Camino Inglés is one of the shortest, though not necessarily the easiest. We are not going to rush, but we will have some challenging days. I welcome your companionship from afar!

Blogging is not my first priority, but I am going to make an effort to choose a photo each day that I can post here, along with a few words – as much for my sake as anything else. (I know, however, the difficulty of posting from the road, so I do not promise perfect formatting. I’ve made peace with that. I am only taking my phone, so we’ll just have to see how the blogging software copes with my remote posts.) 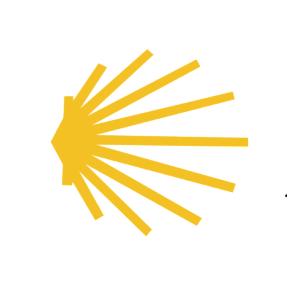 12 thoughts on “The Camino Calls!”