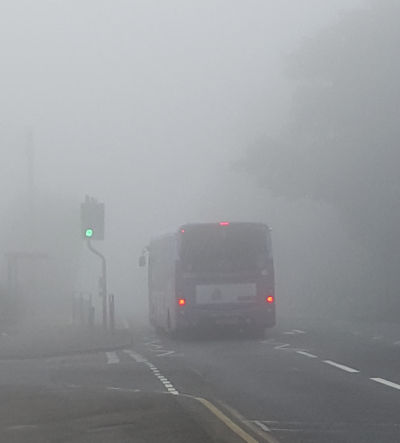 Uh oh, our golden sunshine has been obscured by thick fog — still seasonal, but not so energizing. As a northern California native, I am familiar with fog, though it comes in differently there. Here it rises from the earth, while the California fog comes rolling in from the the ocean. (It’s especially beautiful as it rolls in over the Golden Gate Bridge!) I got out for an early-ish morning walk despite the damp and chilly fog, and experienced some nostalgic waves of memories — I guess I like a bit of mystical mist from time to time. I remember foggy days in Napa when I was first learning to drive, sitting bolt upright in my seat as I peered into the seemingly impenetrable mist. I remember, too, cold summer days when the fog refused to clear when I was living in Sonoma County — and exquisite views as I’d drive up through Crane Canyon where the road would pop up through the low clouds so that I could look across the valleys, with the fog swirling below me. There was no such drama this morning, just a simple stroll down memory lane as I made my way through the coastal fog of Essex.