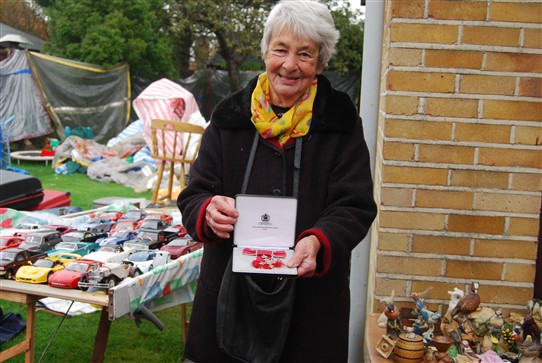 Thundersley said goodbye to an amazing resident this morning. Joyce Long made a momentous decision many years ago when her husband was ill and our local hospital lacked the equipment needed for his treatment. This classy lady began fundraising to raise cash for the hospital and kept going long after the original equipment was purchased and paid for, eventually collecting some £2 million through thirty years of running charity shops and garden sales. I met her through those sales, where she would collect donations from the community and lay them out for sale, one week at a time, several times a year. She worked tirelessly, collecting and sorting, pricing and selling. Everyone knew her, everyone respects her, and she has left us a priceless legacy. Our hospital is better because of her, and our village has seen what one determined woman can do.

Recognized by the Queen in 2004, she was awarded an MBE for her outstanding efforts, and a room in Southend Hospital’s education centre has been named in her honour.

My own favorite memory of her? I was working at Bodkins one day and I watched as this immaculately dressed lady picked up trash off the pavement, muttering about how disgusting it was that people would throw their food on the ground like that — and my conscience prickled, knowing that I had walked straight past it earlier that morning. Joyce taught us all to make the world a better place.