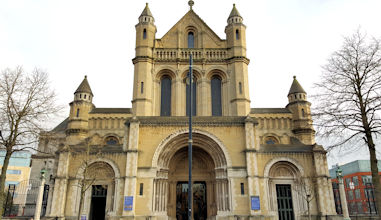 Saturday’s visit to Northern Ireland was a day of two parts. After flying in from Stansted, we rented a car and drove along snowy roads, making our way into central Belfast to visit St. Anne’s Cathedral. Jeff had heard that the labyrinth in the cathedral might be worth seeing, so we made the trip with that being our prime objective — and we weren’t disappointed. St. Anne’s is a beautiful young cathedral which has some stunning features and thoughtfully curated treasures, artefacts, and exhibits as well as a lovely labyrinth. 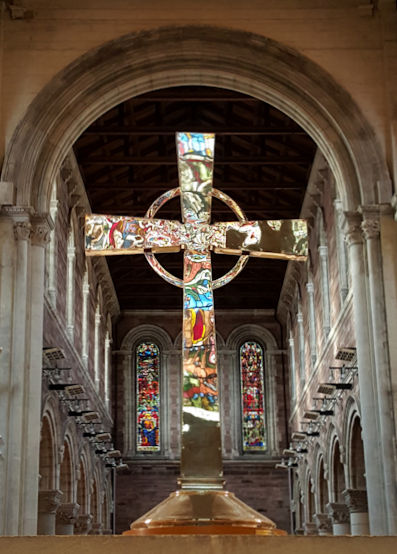 The cathedral cross stands at the rear of the building, perfectly situated to reflect the stain glass windows behind it, weaving a relationship between the ever-changing light and the symbol of Christianity. 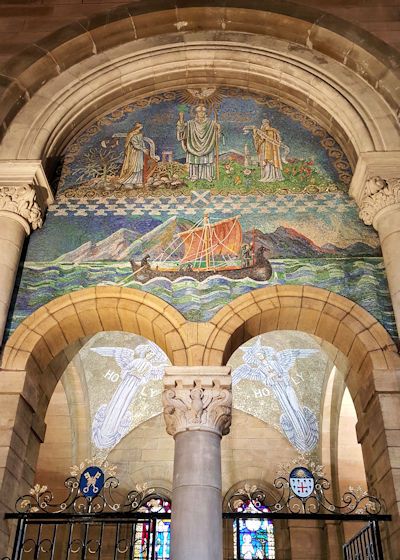 Near the front of the cathedral is a lovely chapel that is open to the public for prayer. Above the entrance to the Chapel of the Holy Spirit is a wonderful mosaic of St. Patrick, and the domed ceiling of the chapel features a gold mosaic showing the four seraphim, each holding its personal symbol. 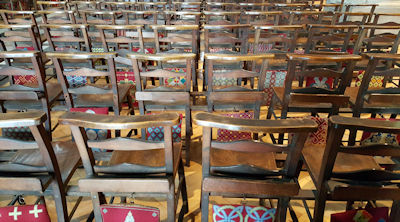 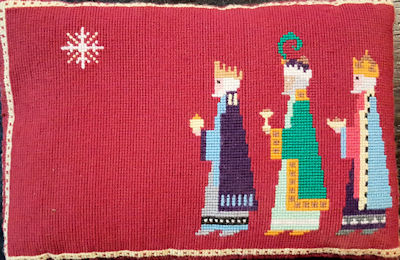 As a needleworker, I was moved deeply by the attention to textile arts, from the stunning rows of tapestry kneeling cushions to a prominent display of historic handworked Irish linen. It was proudly pointed out to me that some of what was on display was far older than the cathedral itself, which dates only to the beginning of the last century. 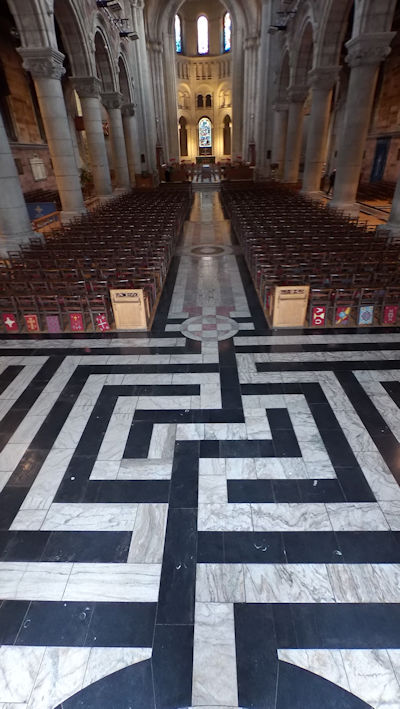 And the labyrinth? Yes! The main labyrinth (there are actually three in alignment to underscore the symbolic placement at each of the entrances to the cathedral) is simple, unique, and perfectly situated to lead the worshiper from the outside world (with its analogy to sin) through the meandering path and directly onto the aisle leading toward the sanctuary and high altar. A bit of research into early texts about the cathedral show that this was very intentional, pre-dating much of the twentieth century labyrinth references with which most of us are already familiar. 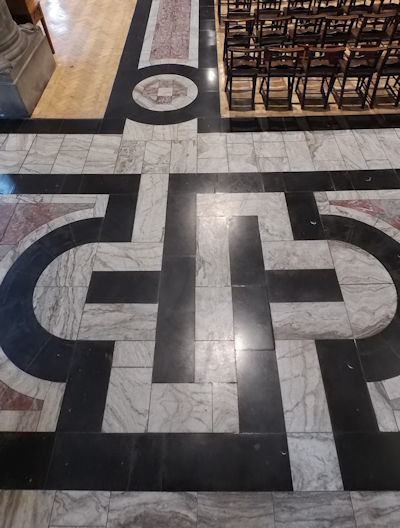 Interestingly, there are two smaller labyrinths flanking the central one, each positioned in front of the side aisle doors, each leading the walker into the aisle, providing the same imagery as the larger one. This is something we’ve not seen before. What really excited us was the value which the Dean and his staff clearly place on the labyrinth; it is accurately described in the official guide as well as the audio tour, and the archivist was very helpful in forwarding his notes and materials to us when we inquired about it. Too often, modern staff members are not briefed about labyrinth history or the reasons for labyrinths being included in sacred buildings.

On the floor in front of the West Door, the main door into the Cathedral, is a labyrinth of black and white marble tiles Follow the white tiles, the path of virtue, and the they will lead to the Altar, But follow the black tiles, the route of sin, and go nowhere.
(Cathedral Guide, page 15)

It was healing for me to visit this oasis of calm — it would be welcome in any city, but I have old stories of chaos and violence in Belfast still circling in my mind, so even though all the old conflicts might not be fully resolved, it feels important to have new imagery and personal memories to take forward.

Saying goodbye to Belfast, we drove north to the Giant’s Causeway…. and that is a story for another day. Stay tuned!