After Lea left for the airport, I decided to take advantage of a free day in London by making a personal pilgrimage to Kensington. Like many Americans, I’m fascinated by Britain’s royalty, especially our two longest reigning monarchs, Queen Victoria and Queen Elizabeth. I’ve wanted to visit Kensington Palace, the grandiose “home” which has figured prominently in the lives of these women who have walked in my imagination for so many years.

Seeing a few of the objects that would have figured in Queen Victoria’s life and seeing the decor she would have seen felt significant. And like most of us, I can never forget the iconic images of Kensington Palace as they were beamed around the world in the dark days following Princess Diana’s death.

Most of the public area is of historic, not modern importance, and I was particularly interested in learning what I could of Queen Victoria’s life. In addition to the rooms permanently on display, there are two special exhibits at the moment, Victoria Revealed and Fashion Rules. 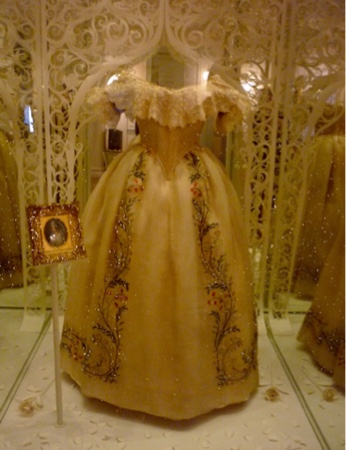 I found it oddly moving to see dresses I have seen in photographs. I am not someone who follows fashion, so it was the personal connection to these women and the stories I have heard about their lives that moved me, more than the designs.

Similarly, seeing Diana’s clothes touched a chord in me, reminding me of the way in which she touched so many hearts, worldwide.

One thought on “Kensington”