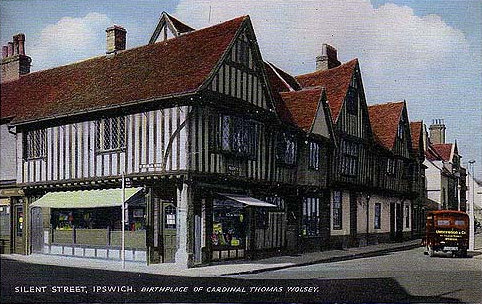 The internet is a wonderful thing! (Obviously, or this blog wouldn’t exist…) After my post about our morning in Ipswich, a reader did a bit of research and sent me an update on the naming of Silent Street. Now why didn’t I think of that? I had googled Ipswich, but didn’t take it any further. I’m glad she did, though, because the reading gave me good food for thought.

When I first saw the sign, my innate pilgrimage/monastic mindedness lead me to assum that it had to do with something prayerful or meditative, something in conjunction with Ipswich being a medieval pilgrimage destination due to its local Marian shrine, Our Lady of Grace, also known as the Madonna of Ipswich.

A website about the historic public lettering in Ipswich gives a short history of selected street names, and suggests two possibilities for Silent Street, neither of which is quite so rosy-tinted or pleasant. Borin van Loon writes:

…. there are two commonly-believed sources of this name. 1. The street became unnaturally quiet due to the large number of deaths from plague in 1665-6 (one week 34 out of 64 burials were deaths from plague). 2. More likely explanation is that straw was laid down on the street to deaden the noise of passing horses and carts when Curson House (known as King’s Hospital – the building no longer exists) was used as a hospital for sick and wounded seamen during the Dutch wars of the 1650s, 1660s and 1670s. However, Robert Malster’s ‘A-Z’ book points out that the first recorded use of ‘Silent Street’ as a name wasn’t until 1764.

One of the blessings of this blog has been the brief research I’ve done into many of the things I see, and this is an excellent case in point. I like to make up stories in my head (which I fortunately don’t usually share publicly), and need to stay committed to searching ever deeper into the truth of things and not be tempted into promoting romanticized imaginings, something that Jeff and I run into frequently in our work as editors and labyrinth historians (we have written about it here.) This Ipswich website may take us closer to the street’s history, but the fact remains that my hermitly soul continues to be intrigued by the thought of a silent street, whatever the reason for the silence.