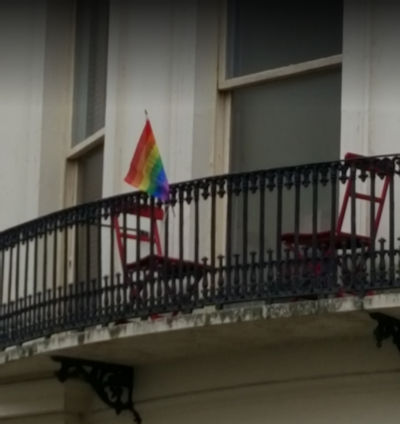 I went to Brighton for the first time yesterday. We were there for work, but took the opportunity to see a bit of the city centre en route to the art gallery where we were speaking in the afternoon. Seaside Brighton is well-known for its phenomenal Brighton Pride parade and festivities, which happened to be taking place this weekend. I wasn’t sure what to expect, but the reported 300,000 people who had crowded the streets to watch the parade on Saturday were long gone by the time we arrived on Sunday morning. I thought this photo pretty much captured the feeling of the morning after –  a downtrodden Georgian mews sporting a friendly little rainbow flag and two empty red chairs on one of the balconies overlooking the road where we parked the car. I could almost see the people who belong to those chairs, almost hear the threads of their conversation as we passed below…

We were both curious to see the new British Airways i360 tower which opened last week, but all we could see was what looked like a cloud on a stick. Anyone paying £13 for a ticket to ride to the top yesterday would only have seen thick fog. From the ground, all that we could see was a slender shaft extending up and out of sight, with no sign at all of the state-of-the-art observation deck. Another time, perhaps.

I will tell you in a separate post about the gallery where we lectured, but for now let me jump ahead to our homeward journey. Leaving Brighton, we detoured off the main roads and meandered toward the East Sussex village of Hadlow Down to visit St. Mark’s Church where there is a large and interesting grave marker with a labyrinth carved between the angel-bedecked arms of the cross. 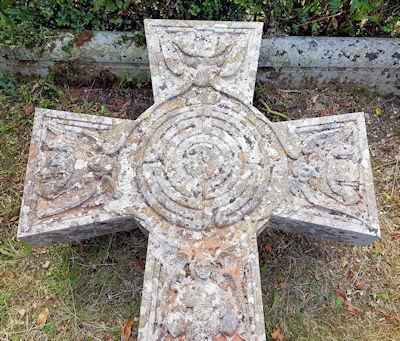 Although the labyrinth is still clear, the  inscription below is badly weathered. As always, I found it a tender experience to try to reach across the decades for clues to an old story, this time trying to learn more of the couple buried here:

Why a labyrinth? What did the symbol mean to them that it would be chosen to adorn their memorial? Curiously, the sizeable monument is set apart and surrounded by a trimmed boxwood hedge, hence enjoying some prominence, but there is no mention of it on the church’s website.